Again, I craned my neck from where I stood just to check whether he was there. I had this feeling that if I did not then he would vanish. But there he was in his favorite white shirt which he wore only on special occasions still as personable as he used to. He had not changed much in the two years I did not see him. He looked tired and older but still dashing. He was not being himself, I could tell it. I knew him as a man who was at his best when not alone. Talking to people was his passion. I heard people back home say he was one man who if left in the company of mutes would inspire the mutes to storm the haven of the gods demanding that they be given back the voices they lost. It was torture seeing him tongue tied. Everyone around him was engaged in animated talk but he just sat in silence not even turning his face to look around. He lost his voice and seemed uninterested to find it. He loved crowds. Crowds were his stage but not this one. These people had spent enough money to feed a whole town for days just to dress up for this day. What seemed to be someone else’s private driver, who failed to get the instruction from his master that he could leave and did not have to wait, would not merit their second glance. There was no guessing how he felt. I knew it. I was there once. I wanted to go hug him if only to reassure him everything was going to be alright but I could not. We were on strict notice to stay where we were. A few more minutes and the ceremony was to start.

Someone nudged me to get ready. It was time the procession got moving. I felt my knees wobble. This was not just another ordinary walk we were taking. We were walking to mark the end of a phase in our lives. I was heading the march. The symbolism was not lost. The pack that once excluded me was going to follow my lead. I looked back to check whether everyone was ready. I gazed in awe at what seemed to be a scene that came alive from the canvas of a great master. Everyone looked radiant and beautiful. They looked so angelic in their immaculate garbs. The light cast by the burning candles in their hands can not rival the glow in their faces. Everybody nodded as we looked at each other. We were ready. The lights went off. The music played. I started to walk.

The events unfolded fast the way I recall it. I heard my name called. I walked to the stage all trembling. I gave an address for which I spent lots of time each night rehearsing. Finally, it was over. I could not even remember now what was it that I spoke about. But I clearly remember, people giving me a wild applause. I must have done something great to deserve such an approval. I looked at my friends, they were all smiles. I was no longer shaking. I was feeling like I could sparkle. If I could freeze a moment in my life so I could savor it again and again, that was the moment. It was our graduation day. I had just delivered my valedictory address and got an ovation. I heard someone shouting my name with glee. It was my dad. His face was beaming with pride. The crowd could not resist but pay him notice. I could not have been more happy not only for myself but also for my father. He did not lose his voice. He waited for the right moment - his daughter's own moment, to unleash it. 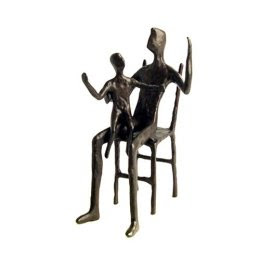 Posted by Grandma Julia at 1:40 AM