When Going Nude Was The Way To Go 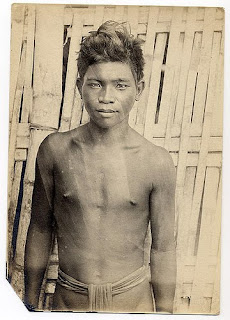 I do not remember what my reason(s) was/were then but I never told my friends that men in our village, it does not matter what age, wore nothing but loin cloths, like the teen age boy in the above photo. The cloth functioned more as a protection rather than  serve as a cover. Could it be that was I ashamed of my own people or was I just afraid they would be judged by my friends based on what they were taught to believe were the makings of a civilized people? I knew that if Eva had seen this photo then, she would be kneeling in the confessional box the first opportunity she got asking forgiveness for allowing her eyes to look at an indecent photograph and for associating with someone who kept photos of naked men.
Whether I was ashamed or afraid, one thing was sure. I did not know it then but the system was doing a good job educating me away from my own people.
Posted by Julehya at 2:29 AM 8 comments